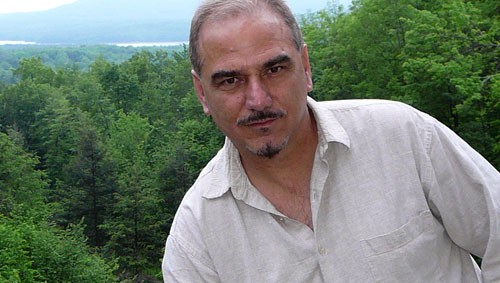 If statements of cultural titans like Apple Computer are any indication, the word “music” now first conjures an image of recordings. Of libraries of mp3 files or compact discs or (if we are old enough or hip enough) LP records. Many composers of the last several decades, however, seem intent on composing pieces that defy the recorded experience. They demand to be heard live in the concert hall. One such piece is surely Gemini by the American composer George Tsontakis.

Tsontakis is an established composer of Greek descent. Born in Queens, New York, he studied composition with Hugo Weisgall and Roger Sessions at the Julliard School and later with Franco Donatoni in Rome. He has been composer-in-residence at Aspen and now at Bard College Conservatory. His accolades include many prestigious awards including the “Academy Award” from the American Academy of Arts and Letters and the Grawemeyer Award from the University of Louisville.

The instrumentation of Gemini is horn, violin, cello, and piano. It consists of two parts that are played continuously. Part One offers contrasting episodes of slow-fast-slow. A three-note motive punctuated with a tone row provides the structure. The opening casts a minor-key scent as it meanders through the changes of the row. The jazz-tuned central episode is intense and provocative—an assault of fanfares from all directions. A recap of the opening follows.

Part Two prompts the thought that it is best experienced in the concert hall. Like music of Gorecki, Messiaen, and Crumb, the space and pacing is such that without the shared experience, the removal of distractions, and the focused attention demanded by a live performance, one might too easily press the “next” button. A door opens to another world where time flows differently. A gentle peal of chords resembling the opening of Messiaen’s Quartet for the End of Time hovers continually in the air, and then unfolds a spectral reflection of Part One. As the composer states, the twin parts are “anything but identical.”

The horn part works well for the instrument. While it soars quite high at times, by no means does it over-rely on the high register. Furthermore, Tsontakis skirts another common trap of contemporary composers by utilizing the low register somewhat. Though excursions below written E3 are few and brief, one descent as low as B2 near the end of Part One stands out as particularly effective. Perhaps there other moments when committed deployment of the very lowest tones would have contributed much, but at least the composer demonstrates awareness of most of the range. Other aspects of the part are quite creative, especially the rocketing short rips at the climax of the fast episode and moments when the horn declaims above lower weaving lines in the cello and violin.

The linked recording is a live recording by the Chicago Chamber Musicians from a performance on May 1, 2005. The hornist is Gail Williams. Sheet music for Gemini—though pricey—is readily available from the usual sources.