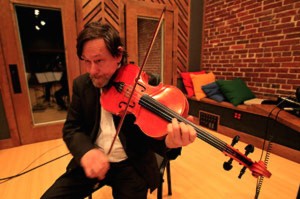 To those who knew him, Marshall Fine (1956-2014) seemed to spend much of his life tormented by inner demons. A self-diagnosed autistic, he lived his adult life primarily in Memphis, Tennessee where he played viola and apparently worked through the challenges in his life by composing music. After his untimely death in a car accident, his friends discovered manuscripts of more than one hundred twenty compositions, including four full-length symphonies, an hour-long Requiem for massed forces, a ballet, and various opera scenes.

“Music in Homage” was written as a eulogy to Noel Gilbert, a violinist and conductor of long-standing in the Memphis area who died in 1991. Gilbert was also the patriarch of a dynasty of musicians whose most famous member is probably Alan Gilbert (his grandson) who rose to fame as music director of the New York Philharmonic. “Music in Homage” is scored for violin, horn, and piano because those are the primary instruments of (Noel) Gilbert’s three offspring.

Fine’s style is chromatic and heavily-reliant on octatonic scales. This piece opens with three stark notes in the piano. They are the musical seed out of which the rest of the piece develops in a series of three or four progressively more harrowing climaxes over a span of about thirteen minutes. Perhaps the most expressive section comes at the end, with the piano throbbing the final heartbeats of life and the violin ascending into the heavens.

The horn part covers all registers of the horn, but it primarily focuses on the meat of the range between written C4 and G5. At times the horn plays open F harmonics, which seem to be the inspiration for some of the piece’s harmonic cells. Another cell consists of a descending major third followed by a tritone, which is a characteristic motive from the tone poem “Till Eulenspiegel” by Richard Strauss. And as in Strauss’s piece, Fine calls for the horn to play fast irregular passage work at the end that requires focused practice.

Since Brahms wrote his iconic Trio for horn, violin, and piano, the repertory for these instruments has been steadily increasing. Fine’s piece carves out a space within this sound world that is unique and powerfully expressive. The parts are available at IMSLP.