This FAQ is an accumulation of tips and tricks I've learned over the years. Putting them here helps me find them again, and hopefully they may be of use to others. However, there are no guarantees that any of the information here will be useful to you. Indeed, it may be harmful, so use at your own risk.

EMPR.1. The screen flickers when I power it on, and it no longer boots up. What's wrong, and can it be fixed?

You can look this problem up on Google Groups. It is apparently a common problem and is normally caused by a faulty power supply. When I had the problem, the screen flickered for a while and then the Proteus would boot up. However, the problem became progressively worse, and eventually the Proteus would not boot at all. Replacing or repairing the power supply often fixes this problem.

EMPR.2. How do I crack open the case?

Slide a flat screwdriver into the slots on the top half of the case. Each of the slots covers a latch that you can undo with the screwdriver. The case pops right off once the latches are disengaged. WARNING: Do not open the case while the unit is plugged in.

EMPR.3. Where do I get a power supply?

E-mu may or may not still be able to provide a power supply for your Proteus, however if they can it is likely to be far more expensive than the Proteus is worth. Your best bet is to get it from the manufacturer. The power supply for mine is on a 7cmx13cm circuit board produced by Skynet Electronics. The original power supply is model SNP-3031. The currently available equivalent is model SNP-9031, which I bought directly from Skynet for about US$40 in February 2003.

I have no personal experience repairing a faulty supply, but in August 2006 I ran across some instructions that Skynet had provided for fixing a power supply that is failing in this manner. The cost of the replacement parts is negligible, so it is probably worth trying if you are good with a soldering iron.

EMPR.4. How do I replace the power supply?

EMPR.5. How do I perform a factory reset?

While simultaneously pressing the Master and Edit buttons, power on the unit. This brings up the Diagnostics menu. Cycle the data wheel around to "13 Initialize." Press the flashing enter button and confirm your choice. Then power up normally. NOTE: This procedure destroys any presets you've programmed yourself. Do not play with other Diagnostics menu items unless you know what you are doing. According to postings on Google Groups, you could potentially permanently damage your software.

PDAT.1. Can this machine do S/PDIF in addition to AES/EBU digital I/O?

Yes. The RCA jacks (labeled IEC Type II) are S/PDIF-compatible. However, you must select either the RCA jacks or the XLR jacks. They are not both active simultaneously.

PDAT.2. How do I select the RCA port or the XLR ports?

PDAT.3. How do I determine which digital port is active?

You can determine which digital port is active from the panel using a hidden diagnostic menu. You must have a tape in the deck for this to work. Press COUNTER MODE, COUNTER RESET, and PAUSE simultaneously. The counter will now display either AES or IEC (which apparently is the same as S/PDIF), depending on the DIP switch setting. If you repeatedly hit COUNTER MODE, you cycle through some error and bit rate statistics. To exit the diagnostic menu, hit COUNTER RESET.

MOSX.1. I would like to use my third-party Appletalk printer in Print Center, and I have the PPD. How do I set it up?

If you are still using 10.2 (Jaguar) you may find this answer helpful. Subsequent versions of Print Center do not seem to have any problems adding PPD files.

Jaguar's Print Center program seems not to have been ready for prime-time. Manually selecting a PPD for my printer turned out to require certain steps before I got it to work. One or both of the following seemed to have been required:

For Appletalk printers, Print Center tries automatically to find the PPD. Assuming it cannot, you should choose the Manual button and navigate to your PPD. In Jaguar, the Configure button was never active even when your PPD was properly identified. (In subsequent versions of OS X, the Configure button works.)

Print Center (starting with OS X v10.3) requires PPD files to be compliant with the PPD 4.3 specification. The last PPD from Dataproducts for the LZR 1580 was only 4.0-compliant. Fortunately, OS X provides a command-line tool called "cupstestppd" that tells you the ways in which your PPD does not comply with PPD 4.3. I ran this against the PPD for the LZR 1580 and created a version of the PPD that is 4.3-compliant. You can download it here.

MOSX.4. I have a TrueType font suitcase that does not work in Mac OS X. Is there any way to make it work?

Apple offers a free utility called AAT Font Tool. (Search Google or the Apple Developer website.) AAT Font Tool is a Classic program, so you must be able to run Classic to use it. Run it against (a copy of) your suitcase file. This often resolves encoding problems with older TrueType font suitcases.

MPRT.1. Can I rotate my display with Mac OS X?

You cannot use MacPortait, even in Classic mode. Portrait Displays has categorically stated that no Mac OSX support will be forthcoming. Indeed, as of early 2003 they had dropped all sales and support for Mac OS computers, presumably in response to Apple's move to discontinue OS9 booting.

Some of the graphics cards that ATI sells at retail include an option called VERSAVISION. A primary feature of VERSAVISION is that it allows screen rotation in OSX. The first one was called the Radeon 9800 Pro Mac Edition. Note, however, the Apple-OEM version of the Radeon 9800 (available on the Powermac G5 as a build-to-order option) does not support VERSAVISION. Apparently, VERSAVISION remains unavailable with any Apple-OEM card, even if you use the drivers for the retail version. VERSAVISION is apparently reserved for ATI retail products.

According to Inside Mac Games, VERSAVISION exploits a feature of Quartz Extreme, which "makes [screen rotation] possible by treating the entire desktop as an OpenGL texture. The desktop can be transformed and manipulated while maintaining full 2D and 3D acceleration." This may mean that a solution for any Quartz Extreme-compatible graphics card could be forthcoming. As of October 2004, ATI offers it on the following products.

I am successfully using MacPortrait under OS9 with a Samsung Syncmaster 240T that has a native resolution of 1920x1200. This required a couple of hacks that are described here.

As shipped, MacPortrait artificially restricts your monitor size to 1280x1024 or smaller, because it refuses to allocate a large enough buffer for anything bigger. However, using ResEdit you can override this restriction. WARNING: make a copy before using ResEdit on your MacPortrait Driver file. Open the MacPortrait Driver extension file in ResEdit. Open the resource type called 'Pref' and open ID 128 (which should be the only one in the list). You will see a list of settings. Scroll down the list. Make sure that Auto Calc Buffer is set to 1 and then change Max Resolution from 1280 to 1920. Save, exit, and reboot. Now the MacPortrait should have a big enough buffer to rotate your hi-res monitor.

You may notice when you open the MacPortrait Controls control panel that the list of resolutions is incomplete and does not include your actual resolution. This is a bug in the control panel, and it is probably one reason that Portrait Displays implemented the artificial restriction—to avoid having to fix the bug. You can safely ignore it.

MPRT.3. The pivotable screen goes blank and stays blank whenever MacPortrait loads during bootup. Is there anything I can do about it?

In certain situations, the monitor I've designated for rotation stays blank after boot-up, making the rotation software effectively useless. The conditions under which I've seen this are:

You can work around this problem by putting your Mac in sleep mode and then waking it up. When you wake the computer up, the pivotable monitor comes back to life. To facilitate the workaround, I have a Quickeys macro set up to put the machine in sleep mode. NOTE: if you use an older PCI video card in a new G4 Powermac, you may not be able to put your computer in sleep mode.

I have occasionally been unable to recover my screen with this procedure if I started from a cold boot. The most reliable results occur after a warm boot (i.e., restart).

MPRT.4. How can I rotate an LCD panel if it comes on a fixed stand?

Almost all LCD panels from vendors other than Apple have screwholes on the back for a VESA-compliant mounting bracket. Typically these form a square with 75mm or (more likely) 100mm on a side. A VESA mounting bracket allows you to replace the stand on your panel with a VESA-compliant monitor arm. These are available from a large number of third-party vendors. Be certain the one you order supports screen rotation. Check out, e.g., Ergotron or LCDArms.com.

Several companies offer mounting solutions for Apple monitors. LCDArms offers a variant of their VESA-compliant arm called the CinemaLift Arm that apparently supports screen rotation. (Verify before purchasing!) Marathon Computer has a rather industrial-looking Cinema Display Mount that is VESA-compliant. MacMice.com offers the VESA-compliant "iBracket" made of clear plastic that matches the bezels of Apple monitors. MacMice also offers a monitor arm (called "iArm"). The website does not mention whether the iArm supports screen rotation, which means it probably does not.

My 24" Syncmaster 240T is mounted on a Model 7500 from LCDArms. My Sony 18" LCD panel is mounted on a 300 Arm from Ergotron. In general, I prefer the Ergotron product, although the one from LCDArms is serviceable enough. The Ergotron arm is more stable and more maneuverable. In particular, I can raise the monitor up much further than I can with the LCDArm, which is useful for accessing areas behind the monitors. The LCDArm is heavier-duty, which is why I got it for the 24" panel. By comparison, neither of these arms provides even close to the effortless adjustability of a flat panel iMac. But then, a flat-panel iMac provides neither hi-res nor screen rotation!

MPRT.5. What the heck is screen rotation?

Screen rotation is the combination of hardware and software that allows you to rotate a display on demand between portrait and landscape orientation. It is also called display rotation and portrait/landscape pivot capability. Here are some photos of my setup. It is simple to re-position the large central monitor (shown in portrait orientation) back to landscape. No rebooting is required. Note also that with the monitor arms I can float the monitors in front without obstructing access to the midi keyboard. 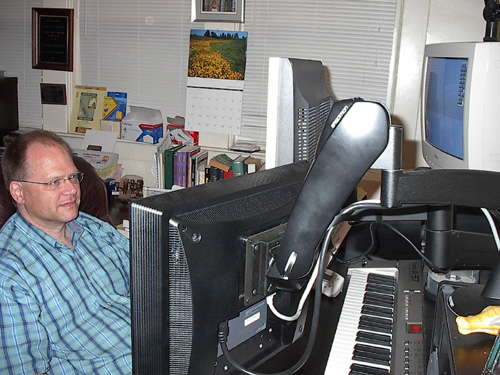 The 7500 has a screw that takes an allen wrench at the top of its base. Before adjusting this screw, remove the old monitor and mount the new monitor, guiding all wires as needed. Hold the monitor so that the arm is parallel to the desktop, then adjust the screw. Turn it clockwise to mount a lighter monitor and counterclockwise to mount a heavier monitor. If there is a significant difference in weight, you may have to turn the screw 10-20 times to notice a difference. (This information is taken from a knowledgebase article at LCDArms.com.)